Wake up the Scientist in You! 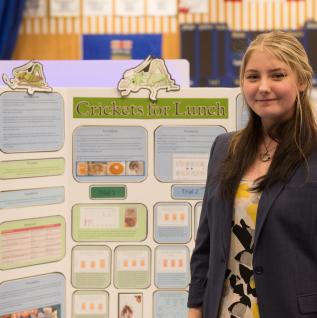 Mac and Amanda could not have anticipated the success they experienced following their participation in the 4-H Canada Science Fair. If you are a 4-H’er in grades 7 to 12 or enrolled in CÉGEP, you could be among the next Science Fair winners!

Last year, we met with Mac D. to talk about her invention, a safer container to ship day-old chickens. A year later, here is what she has been up to!

4-H Canada - Hi Mac! Your invention sounds fascinating, how did you come up with the idea?
Mac - As a poultry 4-H club member and as a poultry farmer, I commonly order my birds for my project through postal service. Often, the birds will arrive with significant losses and injuries. This was concerning to me as it was a regular occurrence and I wanted to do something about it, so I designed a safer container to ship day-old chickens. When a chicken hatches, it has a yolk sack in its abdomen that, from the time it hatches, allows it to go three days without food or water.

4-H Canada – That’s really cool, how does the box work to protect the chickens?
Mac – My box has two unique features: the first is the absence of corners and a round insert, which prevent the birds from being injured; the second is a raised false floor, which allows for the insertion of heating or cooling packs. It stops heat or cold from being concentrated and distributes it evenly, while providing an even surface that reduces the chances of birds trampling one another.

4-H Canada - You must be so proud. What does it feel like to get recognition for your project?
Mac - Initially, it was overwhelming but very gratifying to know that my work earned the Platinum Award for top junior scientist, along with several other innovation awards and a gold medal. I was surprised by the continued interest in my project, with several media interviews and newspaper articles, an invitation to publish my work in the Canadian Science Fair Journal and to present my work at the Prime Minister’s Science Fair.

4-H Canada – Impressive. What are you hoping to achieve going forward?
Mac - I intend to continue to develop my product and expand its application to turkeys and quail. I intend to maintain my interest in science as I continue my education. In terms of science fairs, I will be travelling with Team Canada to MILSET Abu Dhabi in September.

4-H Canada - What would you say to other 4-H’ers like you who may be inspired to do the same as you?
Mac - The 4-H Canada Science Fair program offers those with an interest in agriculture and STEM (Science, Technology, Engineering and Mathematics) the support resources necessary to transform their ideas into innovative projects based on sound science, regardless of their prior experience in science. My advice is not to be discouraged; if you have an idea for a project but feel that you don’t have the skills necessary to develop it, 4-H has the resources to support you.

You can find out more and order Mac’s boxes at saferchickments.com.

4-H Canada - Hi Amanda! Your project has involved using dehydrated household food waste as a food source for crickets to be used for human protein consumption. How did you come up with this idea?
Amanda - My project idea came from a mad scramble for a science fair project. My mom – who has been working in agriculture all her life – told me about the crickets and I started to consider doing a project with them, as weird as the idea was. I decided it might just be weird enough to work! Next thing I knew, we were at the pet store buying a tub of crickets and building a greenhouse to house them!

4-H Canada - There’s never such a thing as a weird idea! You attended the 4-H Canada Science Fair two years in a row in 2017 and 2018. What was your takeaway from this experience?
Amanda - The 4-H Canada Science Fair has let me experiment with different career paths in science to determine what I might want to pursue later on. If I hadn't done my cricket project, I would have never known agriculture was something I'm passionate about. Now I have my own business centred around agricultural education due to the discoveries I made while working on my project. The science fair also gave the confidence and experience to become more involved in 4-H, from the club to the national level.

4-H Canada - Speaking of 4-H, what has been the highlight of your 4-H career in science so far?
Amanda - The Excellence Award I received at the 2018 Canada-Wide Science Fair (CWSF) has definitely been a highlight of my 4-H career. It's been awesome to see my hard work pay off and it's encouraged me to further consider a career in science. Getting featured in OWL Magazine this year has been more than surreal. I've gotten a lot of positive feedback from family and friends. If little 10-year-old me knew about the article, I know I'd lose it!

4-H Canada - Understandably, and little 10-year-old you would be really proud too! Any other plans for this year and beyond?
Amanda - I hope to continue sustainable agriculture-based research going into next year, and to attend university to pursue a career in agriculture after high school.

4-H Canada - Sounds like a good plan! What would you like to say to other 4-H’ers who are considering participating in the 4-H Canada Science Fair and/or a career in science?
Amanda - I cannot recommend it enough. The science fair has opened more doors for me than I can count. If I hadn't entered back in 2017, I might have not still been in 4-H. This opportunity has let me learn so much more about myself and has come with so many benefits, that I wouldn't be able to list all of them even if I tried. You never know where it could take you!

Like Mac and Amanda, you could participate in the 2020 4-H Canada Science fair and showcase your science project to the world! Talk to your leader and sign up at 4-h-canada.ca/sciencefair.
The 4-H Canada Science Fair is offered in partnership with Bayer Canada and the Government of Canada.