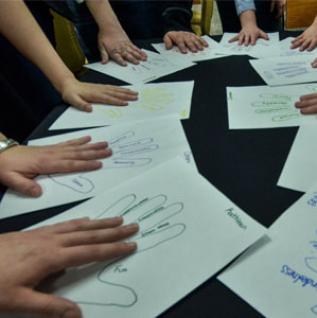 It is my pleasure to introduce to you three new YAC representatives.

Erica Jackson is 20 years old and hails from Upper Stewiacke, a small rural community in Nova Scotia. She has been in 4-H since she was of age but grew up in a heavily involved 4-H family. Erica has a wide variety of both livestock and life skills projects, including dairy, waterfowl, poultry, beef, rabbit, garden, floriculture, crafts and foods. She was also a Junior Leader for three different livestock projects, which allowed her to bring a vast knowledge to YAC. Erica attended the 4-H Citizenship Seminar in Ottawa, Ontario in 2011. She also completed two years at Dalhousie University's Faculty of Agriculture, working towards a Bachelor of Science (Agriculture) with a major in Animal Science and minor in Animal Nutrition.

The best thing about the 4-H program, in her opinion, is the lifelong friends and connections that are established over the years. From taking dairy in 4-H, Erica has realized that the dairy industry is her real passion. She was the Overall Individual Dairy Participant at the 2013 Atlantic EastGen Showcase and won the opportunity to embark on a trip to Belgium this past September to partake in the 2014 European Young Breeders School.

Being selected as the Nova Scotia YAC representative has definitely made Erica’s year. She hopes to bring her outgoing and easy-going personality to the table. She is a very social and approachable person and she really hopes to improve 4-H awareness in her province and across the country. Because 4-H is such a valuable and life-lesson teaching program, Erica strongly believes that more youth should take part! Something that she would say to people who aren't in 4-H is that 4-H isn't only for "country kids" because there is definitely something that can appeal to everyone. Erica is excited become a part of it a fantastic 2014 YAC team!

It is my pleasure to welcome Melissa Taylor to the YAC Team as the Newfoundland and Labrador representative. She hails from Meadows, Newfoundland, is 18 years old, and has been involved in 4-H for 10 years. Melissa plans on taking a visual arts program at Memorial University of Newfoundland in the fall.  In her opinion the best thing about the program is how it brings everybody together. She lives in a rural area so members from 4-5 different communities come together. It's almost like having a second family. 4-H has changed her life by inspiring her to follow her dreams into visual arts.

Melissa’s 4-H family has really supported her to pursue her arts hobby. For example, one of Melissa’s projects was visiting the Memorial University's Performing Arts program.  The members provided lots of support which led Melissa to believe in her career choices and herself. As a part of YAC, Melissa hopes she can influence more youth to join/stay in the 4-H program because of all the amazing opportunities it has given her.

Melissa has attended four national conferences, one Atlantic conference, won 4-H scholarships and made friends from around the globe. Without 4-H, Melissa wouldn't be the confident person she is today. Keeping youth busy is one thing, but putting them into a program with people who really care about them and that teaches them they can achieve anything they put their mind to is a blessing.

Chris Deklein is excited and honoured to be the 4-H Ontario YAC representative. From a small town in Dorchester, Chris is 19 years old and is in his last semester at the University of Guelph’s Ridgetown Campus.

Chris has been in the 4-H program for nine years and has completed 30 projects to date. He has attended multiple youth camps and conferences including Provincial Leadership Camp. Chris also had an amazing opportunity last year as one of six 4-H Ontario Ambassadors.

4-H has truly furthered Chris’s leadership, communication, public speaking and judgment skills through leadership camps, project clubs, and showing dairy cattle.  As Ontario's YAC representative, Chris hopes to give back to the 4-H program and to youth as much as possible. The YAC team is excited to welcome Chris and we are confident he will be invited into his role with open arms and warm hearts.

It is my pleasure to introduce Erica, Melissa, and Chris as the newest members of the YAC team. We are sure they will bring a diverse mind set and skill level to help YAC ensure that 4-H is represented well across the country.