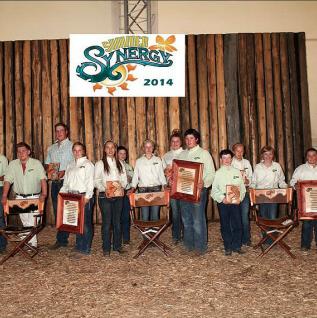 With the recent success of its 5th anniversary, Summer Synergy proves to be an event that is dedicated to the development of youth. Summer Synergy is a program developed as a partnership between Olds Regional Exhibition (ORE), 4-H Alberta, the Calgary Stampede, and Olds College.

This week-long event has brought together over 1700 participants from an array of species, including beef, dairy, and sheep. Throughout the week, participants compete in their respective species with points being allotted from 3 species-specific activities, a Synergy Multi Judging competition, and a Synergy Marketing component. Both multi judging and marketing prove to be great skill builders with participants evaluating 5 classes and completing an extensive marketing project. In the past, the marketing project has involved creating an online auction item or a marketing manual for livestock species.

As an event, Summer Synergy works hard to create a learning environment where youth can showcase their talents not only to the industry, but also to the world. Held in conjunction with the Calgary Stampede, a total of 305 scholarships have been awarded, amounting to over $300,000 being put towards the further education of our rural youth.

The program has seen a tremendous response of over 2800 head of beef, dairy, and sheep shown. It also hosts the Provincial 4-H Beef Heifer Show, Dairy Show, and Sheep Show. In addition, Summer Synergy hosts the Alberta Junior Black Angus, Charolais, Hereford, Limousin, Maine Anjou, Red Angus, Simmental, and All Other Breeds Shows. In the past, Summer Synergy has had the privilege of hosting the 2012 Canadian Charolais Youth Conference, and the 2012 Canadian National Junior Limousin Conference. Moving forward, it will host the upcoming 2015 Canadian Junior Angus Association Showdown.

ORE Event Manager, Tracy Gardner, says that, looking into the future, the organizing committee is most excited and committed to developing and executing celebratory programming for the 4-H Alberta centennial festivities in 2017.

As a Synergy Alumni and scholarship recipient, I am grateful to Tracy and the planning committee for being so dedicated to developing Summer Synergy into what it has become today. I have had the chance to walk across the grandstand stage at the Calgary Stampede twice, and it gives me chills to be able to watch the big screen while they announce the achievements of our rural youth. Summer Synergy has brought me out of my comfort zone and exposed me to a variety of skills and activities never imaginable. I promise that you could ask any Summer Synergy participant and they would say the event has created a lifetime of opportunities and opened many doors.

Before Summer Synergy, I had never been given the chance to interact with so many other species participants. I now have never-ending friendship bonds with participants from the beef, dairy, and sheep species. Alongside those friends, I have met participants who have travelled from across Canada, the US, and Australia - meaning the Summer Synergy is not limited to Alberta youth.

By combining traditional elements with innovative approaches for personal achievement and development, we are able to create a collaborative venue to showcase youth in agriculture. With the age range spanning from 9 to 21, youth have the chance to grow and show the passion they contain for the agriculture industry. Every year youth continue to come with their hopes, dreams, and skills. Youth don’t even realize that they’re shaping their own destiny, and by doing so, they’re shaping the destiny of everybody else involved with the industry. There’s just something special about Summer Synergy!