How I Became a Small Town 4-H Celebrity 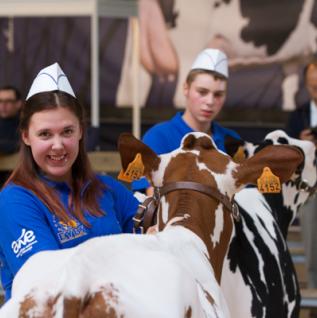 I grew up in a small, rural community called Upper Stewiacke, Nova Scotia, where everybody knows everybody, and where I am now affectionately known as the “Dairy Queen.” I didn’t set out to be the queen of anything—but I did have big dreams. That perhaps is why I’m making a name for myself around here.

Let’s back up to March 2015. That’s when 4-H Nova Scotia’s executive director sent out a media release announcing that I was Nova Scotia’s new 4-H Canada Youth Advisory Committee (YAC) representative. Almost immediately, I received a whirlwind of emails from local media asking me for interviews to talk about the 4-H program and my experiences within it.

After a week of planning and juggling schedules, fellow 4-Her Andrew Greene and I sat down for a live interview on Global Halifax’s morning news show. We talked about the impact 4-H has had on our careers, how 4-H has helped us achieve our goals, and how 4-H programs have changed over the years. We were proud to emphasize one of 4-H’s main goals: to develop a group of outstanding youth who will make a difference in the world.

Later that same day, I had an interview with CTV News Atlantic. We recorded the interview on the dairy farm that I grew up beside—Lonelymaple Holsteins—and I spoke about my achievements in both 4-H and in the dairy industry. Then, Cowsmopolitan Dairy Magazine shared that interview on Facebook. It received almost 1,000 likes! Assuming that those people also watched the interview, that’s almost 1,000 people who heard about the benefits of the 4-H program!

After that foray into local media fame, my grandmother told me I now had a nickname in my 4-H club and community. You guessed it: the Dairy Queen. My success in the dairy industry did not come overnight. It did, however, ramp up over the past two years.

In the summer of 2013, I received top honours as the highest point scoring dairy individual at the 2013 Atlantic EastGen Showcase. As part of my prize, I was selected as one of six young Canadians to be on Team Canada for Holstein Canada. We travelled to the 2014 European Young Breeders School in Belgium for a week this past September!

Nova Scotia’s Provincial 4-H Show was the next thing on my accomplishment list. Not only did I receive several honours, including having a Holstein heifer first in her age class; reserve champion Holstein calf; and honourable mention dairy calf; but I was also chosen to be one of eight Nova Scotians to travel to the 2014 Royal Agricultural Winter Fair in Toronto—a goal of mine ever since I started the dairy project seven years ago.

All of this media exposure is just the start to my first year as being a YAC rep. My goal is to promote 4-H to as many people as I can, and not just to youth. I believe that everyone should be aware of the benefits and opportunities that 4-H has to offer.

Also in March, I was part of a panel discussion at the 2015 Atlantic 4-H Senior Members Conference in Debert and Bible Hill, Nova Scotia. I was asked to give one piece of advice to fellow 4-H members and I would like to share it here are as well: Make goals. Have dreams and aspirations. Your goals might seem unattainable and outrageous, but set them anyway.

Having goals will make you work harder, make you more determined, and make you never give up. Speaking from personal experience, I can assure you that those crazy and far-fetched goals may just become reality if you really believe in yourself and all of your abilities.

And who knows, you might also end up being a 4-H celebrity in your town.